Not many dog breeds have as unique and proud a heritage as the white German shepherd.  The breed had its beginning in Austria in the 19th century when the Queen of Hapsburg reputedly wanted white dogs – to match both the white dresses and white horses used by the family. 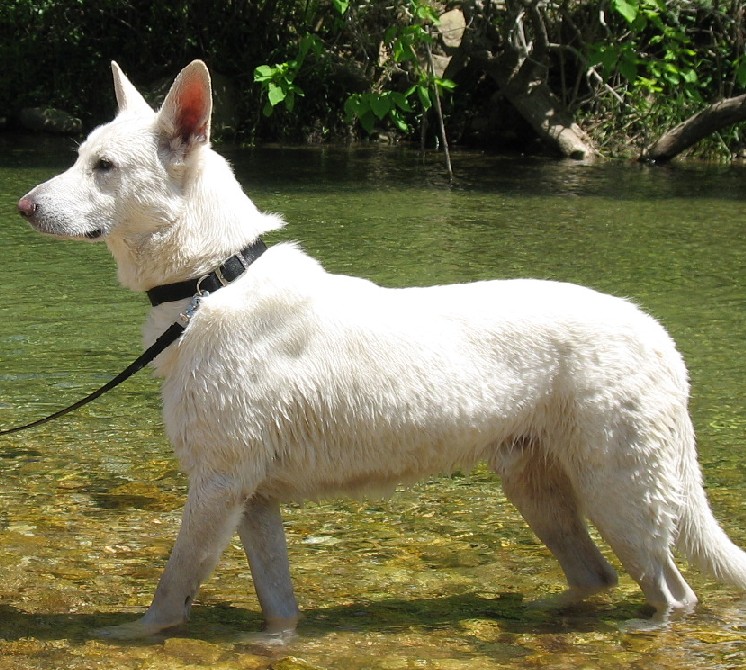 The first German shepherds were imported into the United States in 1912 and in 1917 the American Kennel Club registered the first white German shepherds.  Several movies made during the 1920s, such as “Rin Tin Tin” – the worlds first canine film star – helped to ensure their popularity with the public.

It’s no wonder German shepherds are so popular – apart from their distinctive appearance, they are among the easiest breed of dog to train.  Many breeders consider them to be one of the top three most trainable breeds, along with the Australian sheep dog and the Labrador retriever.

White German shepherds are also known for their loyalty and devotion – it isn’t unusual for them to form a strong bond with a trainer or handler.  And not surprisingly, the breed also enjoys more than their fair share of wins at dog shows and obedience competitions. 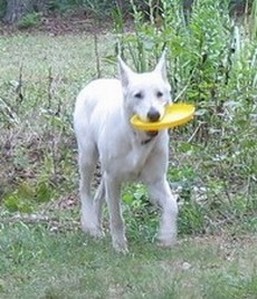 Although they are not instinctively fighting dogs, German shepherds can be protective and alert if necessary.  They are also good with strangers as they are not usually nervous or apprehensive, but tend to be observant and watchful.  White German shepherds are a little bit easier going than other German shepherd dogs, and are suitable for families with small children and other pets.

Their intelligence, ability to learn and their general reliability make them extremely suitable for several different types of task.  German shepherds were originally bred to be hunting dogs;  they also make excellent sheep herding dogs.

They have also become the most popular choice of  breed for security dogs – as they are naturally responsive to commands and have a strong protective instinct.  Many German shepherd owners firmly maintain that their dog only barks when absolutely necessary!

They also make excellent seeing eye dogs – The Germans first introduced the concept by training shepherd dogs to assist soldiers who had been blinded in World War 1.  The very first seeing eye dog was a German shepherd named Buddy in 1928, and the concept reached the United States in the 1930s.

Today, white German shepherd dogs are understandably popular with dog lovers and dog breeders all over the world – they are beautiful to look at, well behaved, and a delight to train and own.

Is a White German Shepherd right for me? 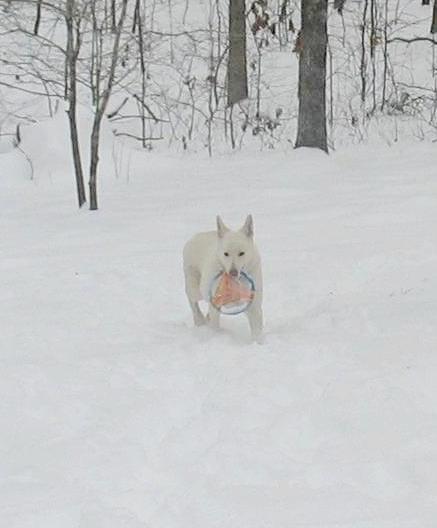 With a good nature and true affection for his or her family members, a white German Shepherd makes an ideal family companion. These large and capable dogs are hard workers, and need both mental and physical exercise to stay healthy and happy at home.

A Real Working Dog
There’s a reason police departments, the military and people with disabilities rely so heavily on this intelligent and capable breed for assistance. Their intelligence and trainability make them ideal candidates for work of all types; this working drive is present in dogs that are family pets too. A white German shepherd puppy (and dog) in fact needs some form of activity and exercise each day; a training session, a run or even a long walk can help keep them fit and occupied.

A Faithful Companion
While white German shepherd dogs are often trained specifically to be guard dogs, their naturally protective nature means that your adult pet will be a watchful, alert and mindful presence in your home. These faithful companions will want to be with you (or a family member) as much as possible, so they’ll be happiest if someone is home with them during the day. German shepherds of all colors make ideal home security systems; only the hardiest of intruders would enter your home and face your alert and aware companion.

Grooming and Care
Although white German shepherds are not as high maintenance as some long-coated breeds, they shed a surprising amount of hair as the seasons change. If you are willing to brush your pet regularly, then this is an ideal breed for you. If you don’t like dealing with shedding or hair, a less furred breed might be a better match.

If you can provide mental and physical activities regularly, want a companion that bonds to you and wants to be with you as much as possible and can cope with some excess hair, then a white German shepherd pup is an ideal addition to your home and family.

Still have questions? We want to make sure your white German Shepherd puppy fits your lifestyle and needs; don’t hesitate to get in touch.